Process of Voluntary Liquidation of Corporate Entity under IBC 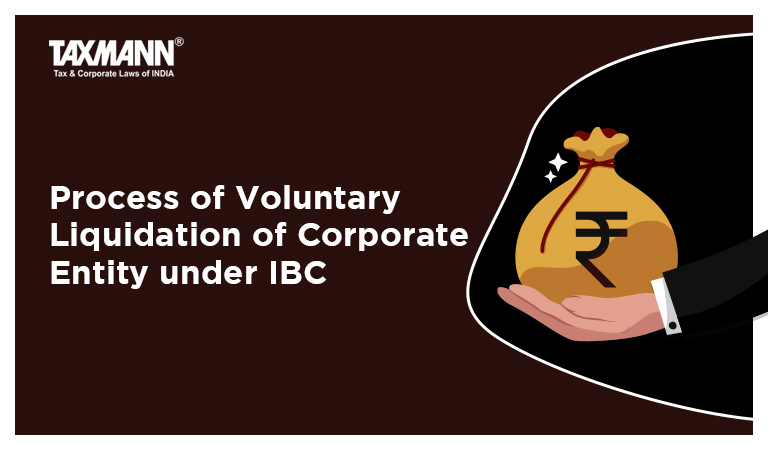 The Insolvency and Bankruptcy Code, 2016 was passed by the Parliament on 11th May 2016 and obtained the Presidential assent along with getting notified in the Official Gazette of India on 28th May 2016. The Insolvency and Bankruptcy Code of 2016 “The Code” has been enacted to set out a streamlined jurisprudence on issues relating to insolvency and bankruptcy and to strengthen the regime of insolvency proceedings of a corporate entity. The term “Winding up” is not defined under the Code, nor was it defined under the Companies Act, 2013 as well. “Liquidation” or “Winding up” is the closure of a business or business segment. This article, highlights the regime of voluntary liquidation process under the Code, and how it is different from compulsory liquidation, and has analysed threadbare the recent amendments relating to it.

Dissolution of a company means that a corporate debtor will cease all of its assets and a proper resolution process in case of insolvency the company is then undergoes the process of Corporate Insolvency Resolution Process (CIRP) to finally close down a company. The process of winding up of a company has been stipulated under Section 255 of the Companies Act, 2013. But since the introduction of the Code, which encompasses the procedure of passing a creditors resolution, the appointment of a liquidator, the making of accounts statements, distribution of assets, disbursement, final call for adjudicating authority etc. are some of the processes which will be observed and needed in order to initiate the winding up of a corporate entity. Further, there are also provisions for voluntary liquidation of a solvent company under the Code, which makes it even more convenient for the entities who are not ready to continue their business as a result of mutual decision.

Types of liquidation process of a Corporate Entity

(a) Compulsory Liquidation: It is the creditors who forced the company to initiate the process of liquidation. There is no choice left with the corporate entity except to go for liquidation. The reasons for triggering compulsory liquidation process may include deteriorated financial conditions, inefficient management by the directors, loss of faith by creditors in further carrying out the business etc.

(b) Members’ Voluntary Liquidation: It is the type of liquidation, wherein the board of directors call for a resolution of formally dissolving a solvent company, which is conducted by mutual discussion amongst the members of the company. The possible reasons for the same may include that the directors wish to step down or retire, the company wants to discontinue its business, etc. In this process, upon receipt of the creditor’s vote for the resolution and the required number of votes are in favour of the voluntary liquidation, the process then starts by appointing a liquidator to get the final authorization from National Company Law Tribunal (“NCLT”), which is the adjudicating authority that governs the voluntary liquidation process.

(c) Creditor Voluntary Liquidation: In this type of voluntary liquidation, instead of directors of a company, the creditors are the ones who chose to dissolve a solvent company. The process is the same i.e. getting the votes in favour of liquidation and based on the outcome, if it meets the requirements prescribed by the law, the liquidation process is carried forward. After completing the requirements and process, the claims of the creditors are settled, assets are realized, then after the final verification by the adjudicating authority, the company gets liquidated. It is to be noted that the distinction of “members voluntary liquidation” and “creditors voluntary liquidation” existed while the liquidation was governed by the Companies Act, 2013. Now, there are no distinction and these distinctions have been eliminated by bringing on board a single governing Section 59 of the Code.

Prior to the Code, Voluntary Liquidation was regulated by provisions laid down under Chapter XX – Part – II which consisted of Sections 304 to 323 of the Companies Act, 2013 which are about twenty sections governing the process of voluntary winding up. Before, the inception of the Code, the liquidation proceedings could be instituted before the NCLT as well as before the High Court. Section 59 of the Code which came into effect w.e.f. 1st April 2017 deals with the provisions of voluntary liquidation. Thereafter, the Insolvency and Bankruptcy Board of India (Voluntary Liquidation Process) Regulations, 2017 which also came into force on 1st April 2017.

« [Opinion] Ocean freight: Not yet an open-and-shut case