Features of the e-Dispute Resolution Scheme

Process of Voluntary Liquidation of Corporate Entity under IBC 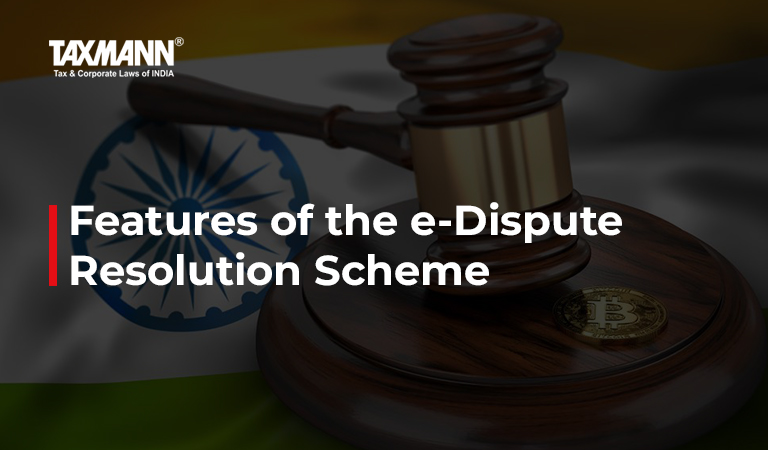 Tax disputes consume a copious amount of time, energy and resources both on the part of the Government as well as the taxpayers. Moreover, they also deprive the Government of the timely collection of revenue. Over the years, the pendency of appeals filed by taxpayers as well as Government has increased due to the fact that the number of appeals that are filed is much higher than the number of appeals that are disposed. As on 30th November, 2019, the amount of disputed direct tax arrears was ` 9.32 Lakh crores. The actual direct tax collection in the financial year 2018-19 was ` 11.37 lakh crores. Thus, the disputed direct tax arrears nearly constitute direct tax collection for one full financial year. Resolution of tax disputes is very crucial for timely generation of revenue for Government. Also, resolution of pending tax disputes immensely benefits the taxpayers as they will be able to deploy the time, energy and resources saved by opting for such dispute resolution towards their business activities. In view of the above, realising the need for dispute resolution in respect of direct taxes, the Central Government came up with Schemes for direct tax dispute resolution such as:

The Government realised that, apart from resolving pending tax disputes, it is also necessary to provides for a new scheme for preventing new disputes and settling the issue at the initial stage. To achieve this objective and also to provide early tax certainty to small and medium taxpayers, the Finance Act, 2021 inserted section 245MA in the Act with effect from assessment year 2021-22. The Scheme under section 245MA is intended to be a new early stage tax dispute resolution scheme for small and medium taxpayers.

In Narayanan Rajendran v. Lekshmy Sarojini (Civil Appeal No.742 of 2001, decision dated 12.02.2009), the Supreme Court had observed that “even litigants have to be protected against too persistent a pursuit of their goal of perfectly satisfactory justice. An unqualified right of first appeal may be necessary for the satisfaction of the defeated litigant; but a wide right of second appeal is more in the nature of a luxury.” The
observations of Supreme Court apply with even greater force to small and medium taxpayers. The normal dispute resolution channel is first appeal to CIT(A) [section 246A], then second appeal to ITAT [Section 253], then High Court on substantial question of law arising out of ITAT’s order [Section 260A] and finally to Supreme Court from High Court’s order if High Court certifies it as fit for appeal to Supreme Court [Section 262]. The dispute resolution at each appellate forum is not time-bound. Even at first appellate forum of CIT(A), pendency is huge and case drags on for years. In case of eligible assessees under section 144C, it starts with filing objections to District Resolution Panel against AO’s draft order and AO then passes order as per DRP’s directions. DRP is bound to decide assessee’s objections within 9 months. Then, appeal against AO’s order to ITAT, then High Court and then Supreme Court. The resolution in appellate fora are again not time-bound. The e-Dispute Resolution Scheme [hereinafter referred to as ‘the scheme’ or as ‘ the DRC scheme’ for brevity’s sake] notified under section 245MA (Notification No. 27/2022, dated 5-4-2022) aims to put in place an alternative optional dispute resolution through Dispute Resolution Committee (not to be confused with District Resolution Panel under section 144C) for small and medium taxpayers to provide time-bound (within 6 months) and final resolution of disputes that arise from assessment orders and TDS/TCS orders/intimations. The resolution provided by DRC is non-appealable. No further appeal lies to ITAT/High Court/Supreme Court. The idea is to provide final and time-bound justice to small and medium taxpayers at first appellate forum itself and also to unclog CIT(A), ITAT, HC and SC.

The salient features of the new early stage tax dispute resolution Scheme for small and medium taxpayers u/s 245MA. The e-Dispute Resolution Scheme, 2022 are as under:

(a) The dispute resolution fora that small and medium taxpayers can opt to approach are the Dispute Resolution Committees (DRCs) [Chapter 2] to be constituted by the Central Government u/s 245MA read with Rule 44DAA.

(c) CIT(Appeals) has huge pendency of appeals. DRC is a creative attempt at utilising the services of retired senior IRS Income-Tax Officials to provide time-bound grievance resolution to small and medium taxpayers within 6 months from the end of the month in which application for dispute resolution is admitted by DRC. 2 out of 3 members of DRC will be retired IRS officials who will be paid a fixed fee per case + sitting fee per hearing. The government utilises their experience and avoids expenditure on salaries, perks, allowances, etc. that would have been incurred if numbers of CIT(A)s had been increased. Also, it would be worth mentioning that increasing the number of CIT(A) would involve lot of time.

(e) Sub-section (2A) of section 245MA provides that upon receipt of the order of the Dispute Resolution Committee under this section, the Assessing Officer shall,—

(f) DRC cannot direct AO to make any modification to the specified order which is prejudicial to the assessee. DRP/CIT(A) can make enhancements. DRC cannot. If taxpayer appeals to CIT(A)/files objections before DRP, he can end up worse off than if he had not appealed/objected. Of course, this comes with further appeals to ITAT/HC/SC and revision application to CIT. If taxpayer makes application to DRC, he will not be worse off than if he had not applied. So the risk that taxpayer will be worst off is not there. But the flip side is there is no further appeal/revision available against modified order of AO in conformity with DRC’s directions.

(g) The disputes that any small/medium taxpayer can get settled by approaching DRC are disputes arising from any variations in the specified order in his case where the aggregate amount of variation proposed in specified order is ten lakh rupees or less.

(h) Para 4(5) of the Scheme provides that “Where the application has not been allowed to be proceeded with as referred to in clause (viii) of sub-paragraph (1) of paragraph 4, the assessee may file an appeal to the Commissioner (Appeals) and the period taken by the Dispute Resolution Committee in deciding on the admission shall be excluded from the period available to file such appeal.”

(i) Disputes that can be got settled by approaching DRC are not the ones pending or meant to be agitated at the ITAT/High Court/Supreme Court level. Objective of DRC Scheme is early stage dispute resolution and prevention of clogging of ITAT/HC/SC. Thus, disputes that can be got settled at DRC level are those that are pending with or can get agitated to CIT(Appeals) or Dispute Resolution Panel(DRP).

(k) Assessee would not be eligible for benefit of this provision if there is detention, prosecution or conviction under various laws as specified in clause (a) of the Explanation in section 245MA. [See Chapter 3]

(l) Proceedings shall be Faceless. The Central Government has also been empowered to make a scheme by notification in the Official Gazette for the purpose of dispute resolution under this provision. The scheme shall impart greater efficiency, transparency and accountability by eliminating interface to the extent technologically feasible, by optimising utilisation of resources and introducing dynamic jurisdiction.

(m) The Central Government may, for the purposes of giving effect to the scheme, by notification in the Official Gazette, direct that any of the provisions of this Act shall not apply or shall apply with such exceptions, modifications and adaptations as may be specified in the notification. However, no such direction shall be issued after the 31st day of March, 2023. Every such notification shall, as soon as may be after the notification is issued, be laid before each House of Parliament.

(o) The assessee would have an option to opt for or not to opt for the dispute resolution through the DRC. That is to say,assessee can file an appeal to CIT(A) against assessments/reassessments/TDS/TCS orders of AO or file objections to DRP against draft order of AO u/s 144C instead of approaching DRC.

(p) The DRC, subject to such conditions as may be prescribed, shall have the powers to reduce or waive any penalty imposable under this Act or grant immunity from prosecution for any offence under this Act in case of a person whose dispute is resolved under this provision.

TDS on Payment for Purchase of Goods | Section 194Q »