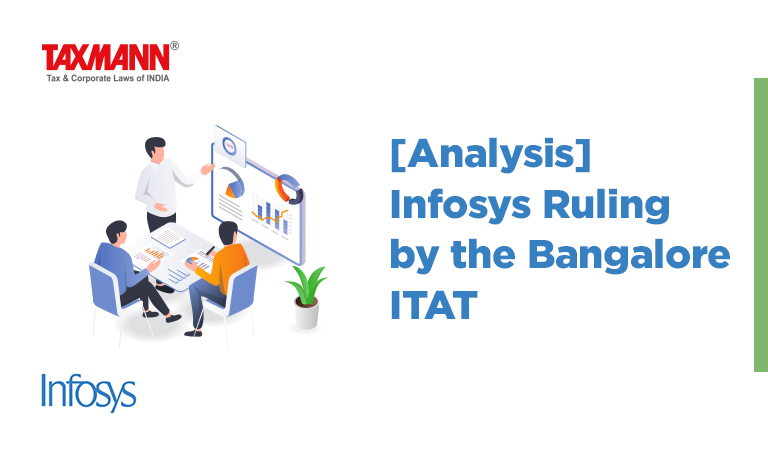 The taxability of Fees for Technical Services (hereinafter, “FTS”) under Section 9(1)(vii) of the Income-tax Act, 1961 (hereinafter, “the Act”) has been a contentious issue for decades, attracting prolonged litigation at various forums. In one such recent ruling by the Hon’ble Bangalore bench of the Income Tax Appellate Tribunal (hereinafter, “ITAT/Tribunal”), Infosys Ltd. v. Dy. CIT, the Tribunal ruled that payments in the nature of FTS for services rendered abroad would attract taxability under Section 9(1)(vii) and the exception envisaged under clause (b) of the same could not be resorted to, in light of the amendment brought in by the Finance Act, 2010. This article critically analyses the impact of this decision and throws light on the judicial and legislative approach towards the scope of Section 9 vis-à-vis FTS in the past two decades.

Facts before the Tribunal in the Infosys Case

In the facts of this case, the assessee was a resident company which made payments to its wholly owned subsidiary in China in pursuance of a sub-contracting agreement, which was held to be in nature of “FTS” and taxable under Section 9(1)(vii) of the Act by the Assessing Officer. The subsidiary company essentially assisted the assessee in providing a part of services to its foreign clients, with the rest of the services being provided by the assessee company itself.

The assessee argued that the payments made to the subsidiary were in nature of sub-contracting charges, and even if they were in nature of FTS, they could not be brought to tax under Section 9(1)(vii) since the services were being rendered and utilized outside India, and to earn income from a source outside India. On the contrary, the Department argued that the situs of rendering of services was irrelevant for the purpose of Section 9(1)(vii) and since the services performed by the subsidiary were utilized by the assessee company in order to subsequently provide its services to foreign clients, the condition of services being “utilized in India” was satisfied.

Before producing and analysing the decision of the Tribunal in light of these facts, it is imperative to first understand the scope and interpretation of Section 9.

Section 9(1) enlists the situations wherein the income shall be deemed to accrue or arise in India for the purpose of its taxability. Clause (vii)(b) of the section lays down that FTS income payable by a resident shall be deemed to accrue and arise in India, except where it is payable in respect of services utilised in a business or profession carried on by such person outside India or for the purposes of earning any income from any source outside India.

Interpretation of Section 9(1)(vii) in the past two decades

In the landmark case of Ishikawajma-Harima Heavy Industries Ltd. v. DIT, the Hon’ble Supreme Court of India dealt with the scope of Section 9(1)(vii) of the Act, governing the payments of FTS and the provisions of the India-Japan Double Taxation Avoidance Agreement (hereinafter, “DTAA”). Elaborating on the principle of “territorial nexus”, the Court elucidated that if the operations deriving said income are not rendered in India, then the income relating to such operations may not be taxed in India. The Hon’ble Court thereby laid down a two-pronged test to determine taxability of FTS under Section 9- the services concerned must be (i) utilized in India; AND (ii) rendered in India.

Since the Department was perturbed by the interpretation of Section 9 in the decision of Ishikawajma – Harima Heavy Industries Ltd’s. case ( supra) by the Hon’ble Supreme Court and its ramifications on the taxability of foreign transactions, the government to nullify the effect of this decision, brought in an amendment through Finance Act, 2007. The same was done by an Explanation inserted in Section 9, having retrospective effect from June 1, 1976, to clarify that the income mentioned in Section 9(1)(vii), inter alia, would be included in the total income of the non-resident assessee, regardless of whether it had a residence, permanent establishment (“PE”) or business connection in India. However, the amendment was inadequate to substantially alter the position of the law laid down by the Apex Court.

« No Sec. 195 TDS on sum paid by ‘Deloitte India’ to ‘Deloitte UK’ for shared service of brand, communication & tech.