A transaction can’t be treated as Benami if alleged beneficial owner is actually the joint owner of property: ITAT

Real Estate Sector plays a very important role in the development of an economy. Concerns were raised by builders/developers regarding high GST rates on the properties. The Government has granted relief to some extent by reducing the GST rates on real estate projects. The builders, developers and others can avail the benefit of the reduced rates as per revised scheme applicable w.e.f. April 1, 2019. 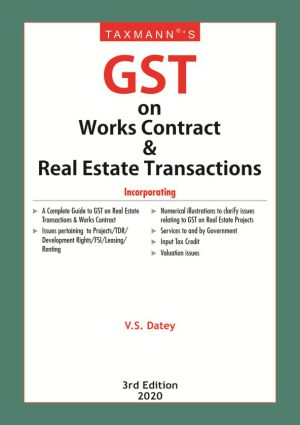 4. These rates apply where the supply of services involves transfer of land or undivided share of land and its charges are included in the amount charged to customer.
5. In respect of new projects, the tax (CGST, SGST/UTGST or IGST as applicable) shall be paid in cash by debiting the electronic cash ledger only [No Input Tax Credit allowed].
6. If landowner – promoter transfers development right or FSI (including additional FSI) to a promoter (developer- promoter) against consideration, wholly or partly, in the form of construction of apartments, the developer- promoter shall pay tax on supply of construction of apartments to the landowner-promoter. The landowner – promoter can take credit of taxes charged from him by the developer promoter, if the landowner-promoter further supplies such apartments to his buyers.
7. No GST is payable where the entire consideration has been received after issuance of the completion certificate, where required, by the competent authority or after its first occupation, whichever is earlier.
8. All cement for the project must be purchased from a registered supplier only. If not so received, the promoter is required to pay GST @ 28% under reverse charge by the promoter (even if total value of supplies received from unregistered suppliers is less than 80%).
9. In case of capital goods procured from unregistered person, the promoter is liable to pay GST at its respective rate under reverse charge.
10. All accounts are to be maintained project-wise. If project is big, it is advisable to have separate GST registration for each project.

b) If promoter intends to continue under old scheme, he has to submit declaration in specified form to jurisdictional Commissioner before 20-5-2019. If the promoter does not submit such declaration, he is deemed to have opted for the new scheme.

d) This option is available only for the ongoing projects as follows:

1. RREP (Residential Real Estate Project) means Real Estate Project (REP) of residential apartments with commercial apartments not more than 15% of total carpet area of REP.
2. Project which commences on or after 1st April, 2019″ shall mean a project other than an ongoing project;
3. Affordable Residential Apartment means apartment having carpet area not exceeding 60 square meter in metropolitan cities or 90 square meter in cities or towns other than metropolitan cities and for which the gross amount charged is not more than Rs 45 lakhs.
4. Promoter means—
a) a person who constructs or causes to be constructed an independent building or a building consisting of apartments, or converts an existing building or a part thereof into apartments, for the purpose of selling all or some of the apartments to other persons and includes his assignees; or
b) a person who develops land into a project, whether or not the person also constructs structures on any of the plots, for the purpose of selling to other persons all or some of the plots in the said project, whether with or without structures thereon; or
c) any development authority or any other public body in respect of allottees of-
i) buildings or apartments, as the case may be, constructed by such authority or body on lands owned by them or placed at their disposal by the Government; or
ii) plots owned by such authority or body or placed at their disposal by the Government, for the purpose of selling all or some of the apartments or plots; or
d) an apex State level co-operative housing finance society and a primary co-operative housing society which constructs apartments or buildings for its Members or in respect of the allottees of such apartments or buildings; or
e) any other person who acts himself as a builder, coloniser, contractor, developer, estate developer or by any other name or claims to be acting as the holder of a power of attorney from the owner of the land on which the building or apartment is constructed or plot is developed for sale; or
f) Such other person who constructs any building or apartment for sale to the general public.
Explanation —For the purposes of this clause, where the person who constructs or converts a building into apartments or develops a plot for sale and the person who sells apartments or plots are different person, both of them shall be deemed to be the promoters and shall be jointly liable as such for the functions and responsibilities specified under this Act or the rules and regulations made thereunder.