The Bane of MAT Credit

Taxes in general are the most vital source of revenue for the Government of India, the same can be said even more assertively for corporate taxes, because of the flourishing conditions our country provides the companies. There are however, methods that companies had utilized in the past to avoid paying taxes altogether or pay a minimal amount whether by way of certain provisions in the Income Tax Act,1961. These companies came to be known as “zero tax companies”. They were earning hefty profits, declaring huge dividends for their shareholders but were not paying the piper. Therefore, the intent of a system like Minimum Alternate Tax (MAT hereinafter) was to bring these prosperous zero tax companies under the purview of the tax collection net.  This impediment to utilization of deductions and exemptions so carefully thought of by the Legislature was also challenged numerous times before various High Courts as being violative of the Constitution, but was denied each time. In this regard, the Kerala High Court famously held that the allowances and exemptions given to the companies which enabled them to become zero tax companies were given by the Legislature, and thus can be restricted by the Legislature and the MAT system is doing exactly that. The MAT for a company is calculated as per S. 115JB of the Income Tax Act,1961, and if the tax calculated as per normal provisions of the Income Tax Act (corporate taxes on taxable income- 25 % or 30%) is lower than the amount of 18.5% of the book profits of the company for that F.Y. (explained below) then the company will pay the latter as MAT. Even though, this system of taxation has drawn a fair amount of criticism, this paper will talk about an aspect even more controversial- that of the MAT Credit system. As per S. 115JAA of the Income Tax Act,1961, MAT credit is the difference between the tax paid on MAT provisions and the normally computed corporate tax liability. A company is entitled to set off this amount in a subsequent A.Y. only when it pays tax according to the normal provisions. The set off is to the extent of the difference between the normal corporate tax liability paid and the tax liability calculated under MAT provisions for that A.Y.

The government has on several occasions increased the period for the set off of MAT Credit as shown herein below:

Arguably, the increase of the set off period from 10 years to 15 years was a welcome move for most companies due to the leeway of 5 more years before the accumulated funds of MAT credit are completely written off the books of accounts of the company.This paper will rebut that presumption.

Research by Deloitte has shown that the lesser the difference between the corporate rates of taxation and MAT rates, the more probable it is for companies to fall within the latter and continue to fall within the same.This is arguably because a higher MAT rate levied on much higher Book Profits would in most cases be greater than a corporate tax rate (higher than MAT rate by a constantly decreasing amount) levied on a much smaller amount (taxable income after deductions and exemptions still available to companies). The trajectory of the reducing difference between the corporate tax rates and MAT rates is recreated hereunder:

Considering the argument given above, in most circumstances the company will continually pay tax under the MAT regime and not normal provisions of the Income Tax Act. This renders the so-called relief of MAT Credit futile as it can only be claimed when the company is paying tax as per provisions of the Act and not MAT system. Therefore, a company is stuck with MAT credit because the opportunity of paying regular corporate taxes rarely appears. If the company will always be forced to pay it’s taxes according to the MAT rates, then what is the point of MAT Credit being allowed to companies as they cannot utilize it? It is an inherent flaw that S. 115AA, Income Tax Act 1961 provides for conditions stating when and to what extent to utilize MAT credit, and these conditions are themselves far-fetched.
To buttress this argument, the table below shows that the tax paid under MAT system is increasing over the years due to more and more companies falling under this system and staying under the same, and in contrast the MAT credit utilization is falling:
Companies are also only allowed to recognize MAT Credit as an asset in their Balance Sheet when there is a reasonable probability that in the coming A.Y. the company will be paying regular corporate tax under the Income Tax Act, 1961. They do so by showing the MAT Credit as “MAT Credit Entitlement” to the credit of the Income and Expenditure amount. If this circumstance does not arise, and MAT Credit stays in the Loans and Advances column of the company’s balance sheet till the end of the specified period after which it is simply written off.
Therefore, even though in theory, it is an asset that can reduce future tax liability- an asset which has already been paid for, the companies are forced to ignore its presence till the time they can raise their taxable income or reduce book profits so as to render regular tax liability higher than the tax liability under MAT system, which as shown above is a infrequent eventuality. 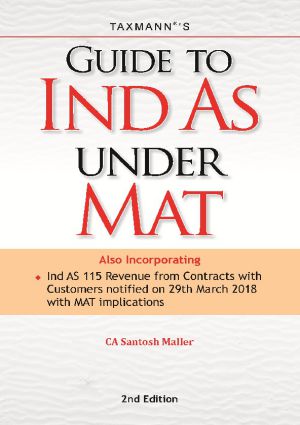 In the race of utilization of MAT Credit, to gain the benefit of the set off, several adverse consequences are taken on by the companies.  For example, companies have started molding their accounting policies to post lower net profits. This is being done so that the chances of falling under regular corporate taxes are increased and accumulated MAT Credit can be utilized. The act of posting lower profits results in loss of market confidence and reputation of the company. The investors and shareholders are also discouraged because of the lack of accuracy and certainty in the accounts of the company. Further, another option for the companies is to increase their taxable income so as to fulfil the condition under S. 115JAA, Income Tax Act,1961. This can be done by increasing the prices of their goods and services, due to which the ultimate burden will fall on the consumer, which would lead to a worse off scenario.

CAG has assessed over 277 cases in 21 states wherein computation errors regarding MAT Credit carry forward and set off has had a huge impact on tax collection by companies. As stated above, only the difference between MAT paid and tax liability under provisions of the Act is allowed to be carried forward as MAT Credit, the CAG has analysed 88 cases in 15 states wherein the assessee had received an undue benefit of under assessment by the Assessing Officer (A.O.) and consequently an undue carry forward of hefty MAT Credit, the total tax effect of the above amounts to Rs.868.21 Crore. Moreover, the MAT Credit set off can only be to the extent of the difference between the regular corporate tax and MAT liability calculated. The CAG has reviewed 182 cases in 19 states and found that in some cases there was none or minimal set-off that could be claimed, but the A.O. allowed a huge amount, and in some cases where set-off could be claimed but the A.O. rejected the set off. The cumulative tax effect of this was upwards of Rs. 650.07 Crore.

CONCLUSION: Not only is the computation of MAT Credit difficult,confusing, and leading to loss of revenue, it is also adversely affecting the companies, their policies and functions. Companies have had to suffer huge costs of business restructuring and accounting changes to come to terms with the MAT regime. Some of these companies are financial companies which are companies tackling consistent losses to pay MAT, and some are capital intensive industries who pay huge amounts of indirect taxes which are being disincentivised from investing, and this could have a huge impact on the economy. Therefore, there is no solace in the increased amount of set-off period, but a complete alleviation of companies from this regime is required to bring parity.

Author:  Shreesh Chadha is a 4th Year B.A. LL.B. (Hons.) student at Jindal Global Law School, Sonepat. He is a keen student of the law and hopes to pursue a career in litigation. His areas of interest include Company Law, Taxation Law, Civil Disputes and other Commercial Litigation.